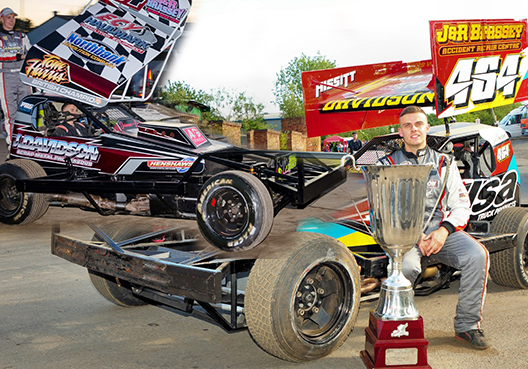 J Davidson Scrap have had plenty to celebrate since the summer as two of our drivers racked up epic wins in major stock car racing meets.

First up was our own Luke Davidson who joined a 28-strong contingent of British drivers heading to Holland’s Raceway Venray for the F1 Stock Car World Cup, also known as the Gold Cup.

Luke was able to fight off the competition to finish in first place overall in the mid-August event, narrowly ahead of Roy Maessen in second and Ron Kroonder in third.

From an early focus on tarmac circuits, he broadened his horizons to also tackle shale tracks, becoming a fully fledged all-rounder.

But his victory wasn’t the last big win of the summer by a Davidson-sponsored driver, and the next champion was crowned on home turf.

On top in Kings Lynn

One of the biggest, if not THE biggest stock car racing event of the year, the finals see drivers from all corners flock to Kings Lynn to compete in an itinerary of races.

The J Davidson-sponsored #84 stock car of Tom Harris was among them as the Warwickshire driver looked to put the pinnacle on a hugely successful season.

And true to form, he was able to fend off the field to be crowned World Champion, a well deserved win in a truly stunning season of stock car racing.

Tom has continued his winning ways already in the weeks since, now proudly displaying the #1 on his J Davidson Scrap sponsored stock car.

In Skegness in mid-October he ranked first in the BriSCA F1 Grand National sponsored by Teng Tools and is vying for a place at the top of the table in terms of overall points scored this season.

Meanwhile at the BriSCA F1 Grand Final sponsored by Teng Tools, which was also held at Skegness Raceway, Luke Davidson finished in first place to keep both members of the dynamic Davidson duo on top of the podium.

At J Davidson Scrap we’re proud of all our drivers, whether they’re home-grown in Altrincham or sponsored from further afield.

You can find out more about each of them on our Stock Car Racing page, which features profiles of all the F1 and F2 drivers we sponsor.

We also sponsor races including several of the most recent events to take place at Skegness Raceway, allowing us to do our bit to keep this competitive community thriving and to make sure there are even more titles for our talented team to win!

Look out for more updates from future events on our blog and social media profiles – with so much skill and the points already racking up, it won’t be long before there’s more wins to report from Davidson drivers.

This article was posted in Stock Car Racing. Bookmark the permalink. Follow comments with the RSS feed for this post.Both comments and trackbacks are closed.