How many scrap cars are there in the UK? 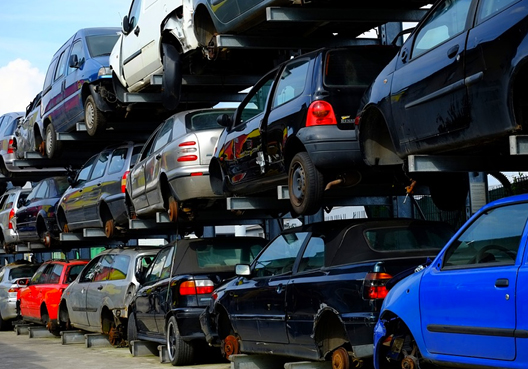 The total number of scrap cars in the UK changes more than you’d think. As a nation, we are growing increasingly aware of environmental concerns, particularly with older, more polluting engine types.

As we move away from diesel and petrol engines, and use more electric and hybrid electric vehicles, the number of scrap cars in the UK reflects that trend, especially as it’s less likely that old cars can be used as spare parts for new ones.

Eurostat publish figures for the whole of the EU, so with the UK about to leave that union, it’s a good time to see how we compare with the remaining EU-27 on scrap car recycling.

Scrap car recycling in the EU

The latest Eurostat figures show that in 2017 there were 6,671,000 scrap cars in the EU. Of those, nearly 1.4 million came from the UK – and France was the only other EU country to scrap over a million cars.

This is up from the UK’s usual average of around 1.1 million to 1.2 million scrap cars a year, and up by half from 2015, the only year of the past decade when there were less than a million UK scrap cars.

Not all of these vehicles are recycled – some are kept in scrap yards for spare parts, for example – but the report gives some insight into the UK recycling rate for scrap cars too.

How many scrap cars are recycled?

When it comes to reuse, recovery and recycling, it’s not a question of how many scrap cars are recycled, it’s a question of weight and percentages.

For example, an individual vehicle can be broken down into different materials, as well as stripped for spare parts – so some parts are reused in other cars, while some are shredded, melted down and recycled into new metal.

The UK hit 86.4% recycling of scrap cars but fell slightly short on 92.2% recovery of parts for direct reuse.

But progress is being made. In 2015 the UK performed much better, reaching 96.9% recovery and reuse, and 87.3% recycling of scrap cars, and the long-term trend is a positive one.

How to recycle scrap cars in the UK

The UK has tightly controlled rules about how to recycle scrap cars so that the different materials and engine fluids cannot contaminate the environment.

At J Davidson Scrap Metal Processors we always aim to pay top prices for scrap cars in the north-west, and break them down at our purpose-built Altrincham scrap metal processing facility.

We were one of the region’s first accredited Authorised Scrap Car Treatment Facilities for the disposal of end-of-life vehicles, and we’re proud to help the UK meet its environmental obligations for the safe disposal of scrap cars.

To find out how much a scrap car is worth, complete our quick quotation form and we’ll get back to you as soon as possible.