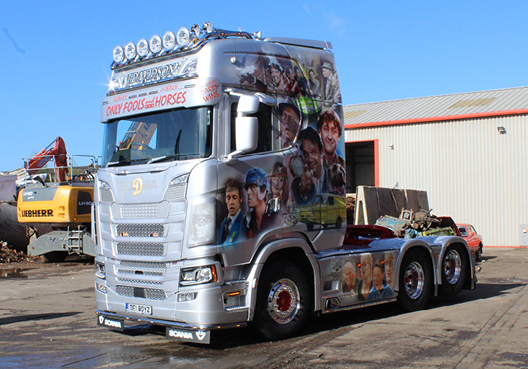 Our fleet of airbrushed trucks have been turning heads for years with their film and videogame inspired paint jobs – but the latest addition to the J Davidson fleet is based on one of the all-time great TV shows instead.

You’d have to be a plonker not to guess that the new J Davidson lorry is of course inspired by… Only Fools and Horses.

If you’re lucky enough to spot our Only Fools and Horses lorry on the roads around Altrincham and the north-west, see how many cast members you can spot on the sides.

There’s Derek ‘Del Boy’ Trotter and his brother Rodney of course – played in the show by David Jason and Nicholas Lyndhurst – as well as Granddad and HIS younger brother, Uncle Albert.

You’ll also see Raquel and Cassandra – the boys’ significant others in later series of the show – and long-time supporting characters like Trigger and Boycie.

There are other famous faces from the show worked into the design too, but we’ll leave those for you to spot the next time you see our Only Fools and Horses HGV out and about!

Everything about Only Fools and Horses is iconic, so it’s no surprise that the cars that featured in the show have become famous in their own right.

On one side of our Scania truck you’ll be able to see the green Ford Capri S that appeared in the episode He Ain’t Heavy, He’s My Uncle.

But you’re probably wondering where the Trotters Independent Traders’ bright yellow Reliant Regal van is – you’ll find it on the opposite side of the truck and on the back of the cab, too.

Finally, our design pays tribute to some of the most famous and funniest scenes in the show’s history, including when the lads attempted to lower a chandelier from the ceiling ready to have it cleaned.

Again you’ll need to hope you catch our Scania cab out on the roads unloaded for one of the most famous scenes of the show’s entire run, which is painted directly on the back of the driver’s cab.

That’s the Batman and Robin scene, and we’ve recreated portraits of Del Boy and Rodney in their costumes, as well as running down a foggy street, just above Derek’s catchphrase: “This time next year, we’ll be millionaires.”

Look out for us!

If you see our new Only Fools and Horses truck or any of our airbrushed fleet on the roads around Altrincham, Greater Manchester and the north-west, we’d love to hear from you!

If it’s safe for you to take a photo, please do. We love knowing when and where we’ve been spotted.

You can send us your photos via Twitter @JDavidsonScrap or follow us on Facebook (again at @JDavidsonScrap) to join our ever-growing group of J Davidson Scrap truck-hunters!

This article was posted in J Davidson Trucks. Bookmark the permalink. Follow comments with the RSS feed for this post.Both comments and trackbacks are closed.