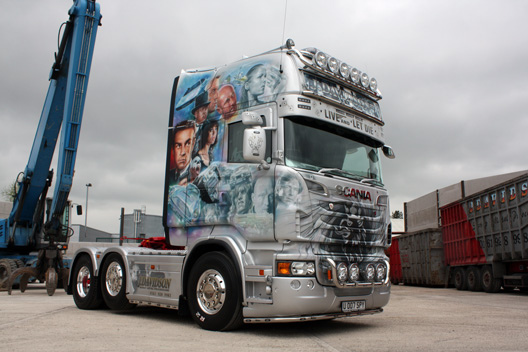 James Bond’s high-octane adventures have captivated generations of cinema-goers throughout the films’ 50 year history. And while the world waits for the release of his latest movie, “Skyfall”, fans in Cheshire can catch a glimpse of another addition to the Bond legacy…

The three figure sum, Scania R730 6×2 Topline truck is a moving monument to all things Bond and is the latest addition to the fleet at Altrincham scrap merchants J Davidson.

It’s fully liveried with a montage of iconic images from all the classic movies and in the spirit of the films no expense was spared. The timeless images, airbrushed by artist Matthew Penneycott, took two months to complete costing around £5,000.

Unlike Bond the truck wears its identity on its sleeve and boasts the enviable number plate: U 007 SPY.

If all that wasn’t enough, the truck even has the seal of approval of current Bond Daniel Craig. The English star sent a personalised card to the team at J Davidson’s to show his appreciation for their tribute to the super-spy.

By popular demand you can now see the truck for yourself by appointment for your eyes only!

It’s not hard to see why the truck meets with Bond’s approval- it has almost every gadget you could think of (except maybe an ejector seat) including roll actuated suspension and an air conditioned pod- perfect for relaxing with a Martini. It’s also the only truck in the UK to be fitted with Hella spotlight technology.

Managing Director and bond-fan Jamie Davidson says: “We’re delighted with the Bond Truck and like the man himself it always seems to be the centre of attention wherever it goes. While Bond’s reckless driving has seen him write-off a number of luxury cars over the years- if he ever turns them over to us we’d be sure to give him a fantastic deal on the scrap metal!”

This article was posted in News. Bookmark the permalink. Follow comments with the RSS feed for this post.Both comments and trackbacks are closed.