ENGLAND HAS A NEW EUROPEAN CHAMPION 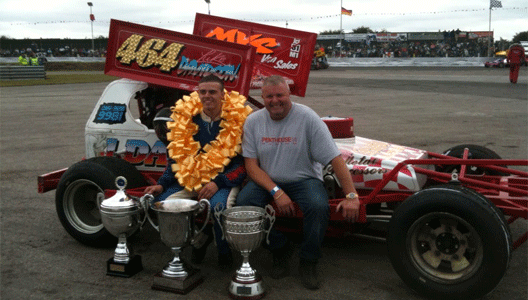 Throughout the year Luke had been accruing points at Stock Car races across the length & breadth of the country, accumulating in enough points for him to qualify for the European Championships held at Northampton last Sunday.

One of 32 drivers in the race Luke started in 20th position which meant, as a contact sport, he had to skilfully manoeuvre his way past 22 other drivers, moving a few out of the way in the process. Racing over 25 laps Luke aged just 19 drove with the experience and skill much beyond his years to finish in first place. A Fantastic result especially when you consider he has only been driving F1 for 2 years.

Luke’s sights are now firmly set on a placing in the semi finals of the World championships to be held in Buxton in 2 weeks time on the 1st of August. A good result in this will see him chasing the title of World Champion in September at Coventry.

This week is proving to be a double Whammy for Luke as on Monday 19th July he also passed his Class 1 HGV licence. What an achievement and still only 19 years old.

This article was posted in Competition, News, Sponsorships, Stock Car. Bookmark the permalink. Follow comments with the RSS feed for this post.Both comments and trackbacks are closed.