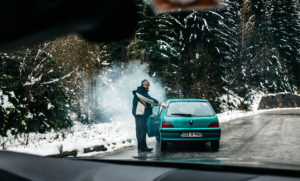 All cars develop some ‘idiosyncrasies’ over time, which are usually a sign that part of the vehicle is wearing out.

From rattling interior panels to strange smells wafting in through the vents, there are lots of ways to tell that the clock is ticking for your former pride and joy.

These are some of the top tell tale signs that help motorists to know when to scrap cars and put the cash towards a newer set of wheels.

Some minor squeaks from an interior side panel are par for the course, but over time they can add up to an absolute racket – and often coincide with more major problems elsewhere in the car.

A flat battery in itself can be changed or charged, but can also be a sign of problems with your electrics, which can be excessively expensive to fix on an older vehicle.

Unusual smells from the engine bay, especially combined with smoke, can be a sign of an oil leak, hydraulic problems or a damaged clutch – again, often repairable, but potentially too pricey to be worth doing.

When Meat Loaf sang “I can see paradise by the dashboard light,” he could have been singing about car heaven. If your dash lights up like a Christmas tree with inexplicable warnings every time you go for a drive, think about saying bye-bye to your banger.

Your car’s MOT is often where a major fault comes to light and can leave you without a legally driveable vehicle with little to no warning – so call your local scrap yard and get them to take your uninsurable vehicle immediately, to avoid any fines or penalty points for having it parked up with no tax, test or policy in place.

Hanging on to an old, inefficient vehicle can cost you more in the long run, from running repairs to poor fuel economy. Look at scrapping your car to get funds towards a newer model and you might find it’s surprisingly economical overall thanks to the reduced running costs too.

Getting rid of your old car doesn’t have to be because it’s no longer roadworthy – sometimes you just want an update, or an upgrade if you’ve come into some money. Scrapping an old car is always an option, and can be much faster and easier than trying to sell it.

If your doors don’t close without a slam or your exhaust pipe trails along the ground, your car is probably past its best – so plan to get a newer model before your current vehicle falls to bits completely.

Last but not least, your insurer might let you know that they think your car is beyond economical repair. If you’re still left with the car to dispose of, scrapping it is a good way to get value out of a vehicle that you can’t sell on second-hand!

This article was posted in Scrap, Scrap Car. Bookmark the permalink. Follow comments with the RSS feed for this post.Both comments and trackbacks are closed.