We’re Getting Ready for Truckfest 2016! 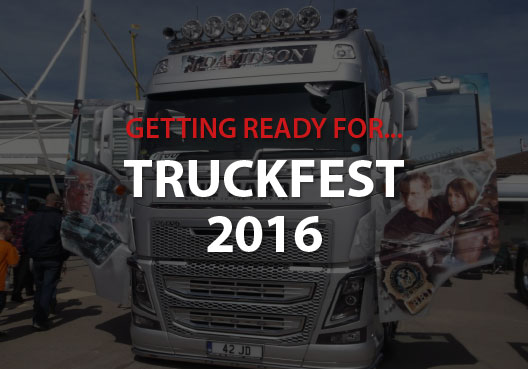 It’s that time of year again – the wax and polish are out, in preparation for our annual pilgrimage to Peterborough on the 1st May… Where we’ll be taking on Truckfest 2016!

My, how time flies when you’re scrapping Manchester’s metal. It barely seems like 5 minutes ago that we hit the road headed for Peterborough to attend last year’s Truckfest. As always, we had a great time hanging out with like-minded truck-lovers and catching up with a few old faces from all over the country. And now the time’s arrived to do it all over again!

Last year, Truckfest had its most successful year in the event’s entire 35-year history. Peterborough is the big one, easily earning its title of Europe’s largest commercial vehicle show. There was over 2,000 trucks in attendance and the organisers promised to bring back the best of the bunch this year – and yes, that means us!

The Terminator said “I’ll be back…”

Not only is it a great place to catch up, Truckfest is a chance for us to show off our fabulous-looking fleet. Every year we’re representing the North West and last year it was well worth it, as The Terminator won a ‘Highly Commended’ award after being entered into the ‘Custom Non-Working Truck’ category.

The iconic J Davidson fleet won’t be the only celebs there this year. We’ll be rubbing shoulders with stars from TV’s Ice Road Truckers and Lizard Lick Towing. Fancy a little truck action for yourself? It’s not too late – tickets are still on sale on the Truckfest website.

And so the countdown begins!

After last year’s success, we can’t wait to head back. We’ve got a couple of days before we hit the road; the 2-day event begins on 1st May. In the meantime, we’ll be prepping our trucks with love in our hearts and a prize in our eyes. There’ll be plenty of TLC going round…(That’s Truck Loving Care!)

You know us – we’re Die Hard truck-fans (couldn’t help that one!) which is why we always attend a host of other events throughout the year. This year we’ll be making appearances at Truckfest 2016 North West, right on our doorstep at Knutsford, plus we’ll be heading over to Ireland, and also the annual Barnard Castle show. Keep an eye on our social media channels, @JDavidsonScrap and www.facebook.com/JDavidsonScrap to find out where else you’ll spot us!

Are you heading to Peterborough for Truckfest 2016? Or any other truck events this year? Leave a comment and let us know. Last year we took along The Terminator, James Bond, Die Hard plus a few others from the fleet, but who would you like to see at this year’s show?

This article was posted in Barnard Castle Truck Event, News, Trucks. Bookmark the permalink. Follow comments with the RSS feed for this post.Both comments and trackbacks are closed.